Almost 9 out of 10 (87%) of those surveyed cited pregnancy prevention as the most important factor when choosing a form of contraception. However, the majority of women surveyed use forms of contraception which are the least effective in preventing pregnancy. 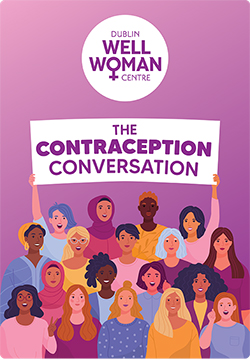 Speaking on the findings Alison Begas, Chief Executive Dublin Well Woman Centre, said, “This is the most comprehensive research carried out on contraception in Ireland in the last ten years. The findings show there are still significant mistruths around contraception and fertility amongst women in Ireland. It also points to significant barriers on the part of women who are trying to access their preferred forms of contraception.

The survey also found that contraceptive failure is resulting in pregnancy. 35% of those surveyed said they had sex where the contraception failed, and claimed it resulted in a pregnancy.

At the Dublin Well Woman Centre we fit an increasing amount of Long Acting Reversible Contraceptives (LARCs) every year, and we fitted over 1,600 in 2019. LARCs are more dependable than other popular forms of contraception such as the pill or condom, whose effectiveness depends on rigorously compliant use. Implants and coils are more than 99% effective. LARCs have an extremely high rate of success, and thus are our best chance of reducing the incidence of unintended pregnancy.”

The Dublin Well Woman Centre is experiencing a growing demand amongst women in Ireland for LARCs with many women increasingly aware of the benefits of LARCs when presenting to a Well Woman Clinic doctor for their initial consultation.

Other key findings include:

About the Dublin Well Woman Centre:

The Dublin Well Woman Centre (DWWC) was founded in 1978, with the aim of giving women in Ireland access to information and services around contraception, at a time when it was largely illegal. In the 1980s and 90s the organisation fought a number of court cases at the High Court and Supreme Court, eventually winning (at the European Court of Human Rights) the right to give women information on abortion and on abortion services available outside the State.

DWWC operates three women’s health clinics in Dublin, and employs 34 doctors, nurses, counsellors, and administrative staff.  Over 35,000 consultations are provided annually, and the DWWC prides itself on offering services that support women at every stage of their reproductive health journey.

The Dublin Well Woman Centre is a not-for-profit organisation and is a registered charity.